So, just to make it quick, it's a holiday season here (not 'season', but only two weeks), and I had a very little time (there is a pack of homeworks I haven't done), so I had to work on the easier project.

Just to tell you, a few days before the holiday came, I received an e-mail that said that one of my VNs, Crescent Moon, had been uploaded to Softpedia. Well, being curious, I decided to check it by myself. Yes, it was true that Crescent Moon was uploaded to Softpedia, but the review, "Very good story but poor background" . Ouch. Luckily, there hasn't any user review yet.

Being ashamed (yes, I created the BG), I decided to fix it, and then I found out that I no longer had the old resources (it was in Ren'Py 6.9.0 in my old PC, which was virus-infected and I had to delete all of them). So I also had to download the Windows version of it, and then open it in the Ren'Py 6.10.1d launcher.

I didn't dare to play the game (you know how bad it was), so I just went straight to the script. But before it, I went online to find some BGs. Morguefile and Imageafter didn't give me a satisfying results, so I almost got desperate. And then I went to Flickr. At first, I thought that the pictures aren't freely used, so even though there was a lot of good pics, I couldn't download them. But when I went to the FAQ, I found out that some pictures are licensed by CC, which meant they could be used for free. Then I tried to find some good pictures for the background. Luckily, there were so many good pictures there. 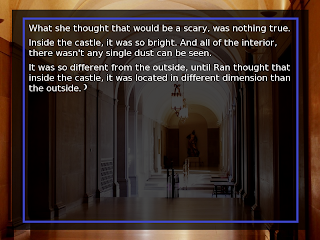 Done with the pictures, I checeked the script. Well, some of the terms weren't quite matched with the BGs I had downloaded, like 'white castle', the BG showed a stone castle. So I changed them, quite a work. Then I fixed some mistypos, and then with the addition of some words, the results was great. While the old one consists of 216 screens and 2856 words, here's the lint for the new one:


Quite a lot, huh? So, then after I upload them to Ren'Py Games, I'm gonna tell Softpedia that I have the update for Crescent Moon. Hope they like it better, and so are you :) 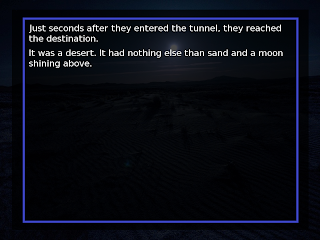 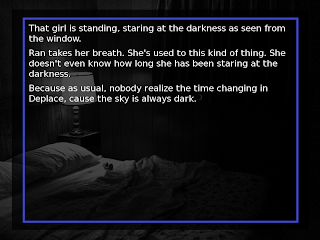 Anyway, this was it. I still got a lot to do. My new project, it might stopped for a while, since after this holiday, I will have a mid-term test. So, see ya!