Crescent Moon : The Truth of Feelings

Yup, this is my first (published) project on Visual Novel. This came after a good friend of mine, Anne (Himeka-sama), gave me a short story. And to be honest, actually she didn't know what I was going to make with her story. She knew it after I sent her a copy of the finished VN.

So, first, about the story:

In the end of the world, a girl is kidnapped for a power that she doesn't know by herself. In the meantime, this girl feels something about the man who kidnapped her. Will she know the truth of her own feeling?

Okay, that's the synopsis of the story. I think that's enough, because this VN is only about 10-15 minutes long and contains about 2800 words. And there are some screenshots: 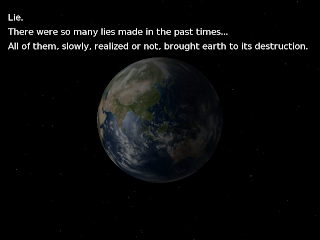 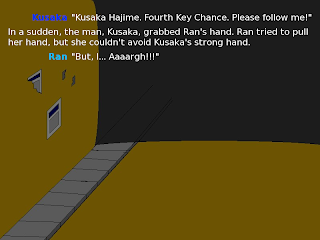 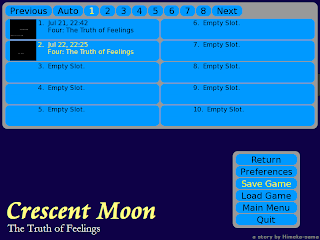 Those are some screenshots of the VN, as you see I didn't draw well, cause I'm not good at drawing CGs, and I only used Paint in making them, except the earth picture, came from Celestia.

I guess the only right thing about this is the music. I took them from several websites, and put it in. I tried to do this as good as I can, because, with bad CG, I think the other 'power' that a VN has is music. And that's the result. The other friend of mine liked it. I don't know how about you, but I hope it's okay.

Oh, almost forget. Actually I should call this a Kinetic Novel, not a Visual Novel, since this don't have any choice to choose. And I didn't use much programming for this, just standard stuff, and maybe some custom transitions. I think I'm gonna learn some other stuff next time.

And you can download this, too. Just click on your OS choice: Windows, Linux, Mac. Feel free to comment about this thing here. I also posted this on the Lemmasoft Forums here.

Finally, a huge thank to Anne, to give me a short story (I'm waiting for your other stories, too). And you, to read this blog (more thanks if you played my VN!)