Okay, let's start from the beginning, exactly when I downloaded a VN titled "Gaming Buddy" which was created by Taroku. It was a very short VN, I think it was as short as The Question shipped in the Ren'Py Demo, only Gaming Buddy has no choice. Suddenly, when I was playing Gran Turismo 2 after I played Gaming Buddy, an idea came to my mind. "I think I can make it longer", that was what I thought. So, for the first move, I tried to rewrite the story whilke also looked for some resources.

But, of course, there was a flaw, in fact, some flaws. The project delayed for a few weeks, even almost a few months. Just when I started to work well, there were the Mid-Semester Test and Final Semester Test in almost the same month, the preparation completely took all my time to work on this. So, this Semester holiday, I try to finish this, with deadline before the New Year.

Finally, after a few days of work, I finished the beta version of "Gaming Buddy-R" (The "R" should stand for "Remake"). This was not the release version, because I haven't asked the original creator, Taroku, yet (I thought I should ask the first creator before releasing a remake version of something, so I did it). So I sent him a PM in the Lemmasoft Forums. He approved, and even better, he gave some advices on the beta version, which then became the release version.

The release version is the Version 1.b, because there was also some mistakes in the 1.a. And here is the statistics from the Lint:


That's short, right? Well...that's all I can do. I couldn't write a longer story because of what Mugenjohncel said as a "Writer's Block". But I managed to make 2 choices in it, and one of them also will give the reader different path (well...the 'Bad Ending' is totally shorter than the good one), so this is technically a Visual Novel. More better, if you compare to my first work, O.T.W. 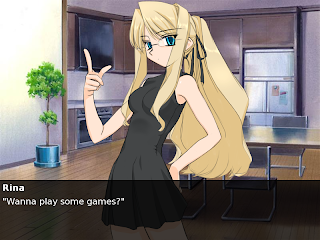 There are a lot of changes from the original version of Gaming Buddy. From the story, I made different storyline, while also kept some parts. Longer? Of course. Better? I don't know. Then the BG art, I use BGs from Kaikei Sozai Mise and Mei Miyamura, while the original version used BGs from BCS. Then I also added some music from Feather Drug, Tymphony, Maya Felipic, and UNEX. You can find all of them in Jamendo site. I also used some sound effects from A1 and OSA. The only same thing between the remake and the original version is the sprite. We used the same Tsuina sprites, only I added some expressions in the remake.

Some new stuff I learnt in the making of this were the usage of Sound Effects, more Choices, and also the usage of Values (that True/False thing, you know). I also learnt some other Expressions to show text. I was going to use some other customizations, but I think it's enough for this project. 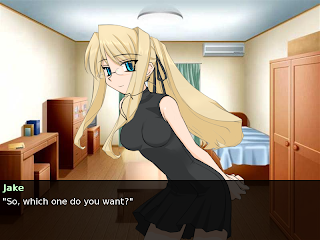 Last but not least, huge thanks to Taroku, the original creator of Gaming Buddy, for the approval and some ideas. Also to samu-kun for the links to
Jamendo. And please, enjoy my third VN and my fifth Ren'Py Project, Gaming Buddy-R.
Download:
Windows
Linux
Mac
Posted by grim_reaper di 8:02 PM